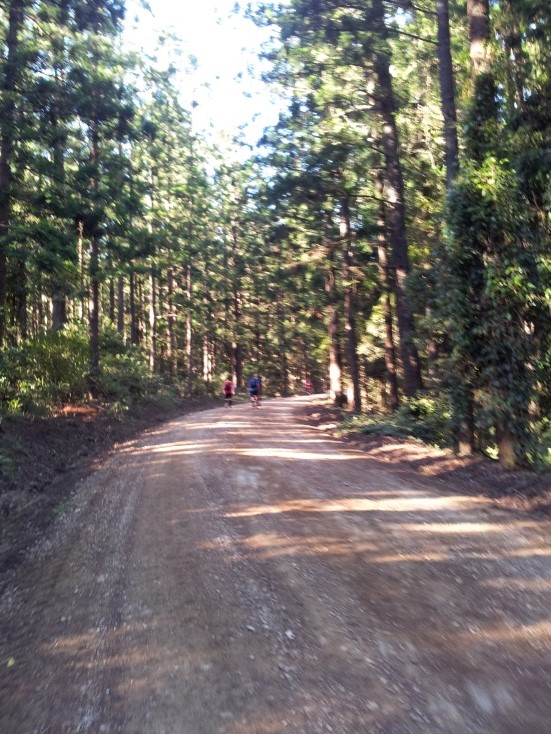 At the end of May I am running a 100KM race, the London to Brighton Challenge (to raise money for the CoppaFeel breast cancer awareness charity), if you’d like to sponsor me, please visit my JustGiving page. Although I have run an 80KM race before, this will be my first 100KM, and it requires a fair bit of training and ideally mini-goals along the way. One of my challenges, in terms of my training schedule, was that April was a heavy travel month for me, with conferences and meetings in Vietnam, Japan, and Australia – so I was on the lookout for a goal in Australia to add focus to my training.

Whilst searching the internet for a marathon (or similar) in the Brisbane area on the weekend of 30/31 April, I found the Mount Mee Classic, to be run on 31 April. This marathon is billed by its organisers (The Run Inn) as possibly the toughest in Australia. What makes it tough is the fact it is an off-road race, with about 1400 metres of climb (which is about the same as running to the top of Ben Nevis in Scotland). The 2013 route has more downhill than uphill, but downhills don’t actually compensate for uphills, and several of the downhill sections are too steep to run down comfortably.
So, the Mount Mee Classic it was!

The Day
The first challenge was getting to the start. The race started at 6:00am, inside the D’Aguilar Range, about 24KM miles from the finish in Dayboro. The race starts so early to avoid the worst of the heat of the day (even so, we were running in 27°C by the time we finished, despite starting at 6:00am and even though Australia is moving towards its winter).

At 4:30am, I got a lift to the bus pick-up spot in Dayboro, where it was still very dark – the sun not being due to appear until just before 6:00am. At 5:00am a bus ferried us to the start, at a place called The Gantry.

We arrive at The Gantry at about 5:40am and it is still dark, with runners being registered by the light of lamps. At about 5:50am it suddenly becomes light. The Gantry, just North of Brisbane and is at 27° South, which means the switch from night to day happens very fast, especially for somebody from Nottingham (53° North), where, because we are so much further from the equator, the switch from night to day is much slower.

Just after 6:00am we are off, with me near the back of the pack of just over 100 runners. In theory the first 10KM (six miles) are downhill, but we quickly discover that the descent to Rocky Hollow is broken up with numerous uphills and some of the downhills being so steep and slippy that non-elite runners need to check their speed. At this stage we are all fresh, the sun is not too hot, so progress is good. For me, the first 10KM is completed in about 1 hour (but the next 32KM took about 4 hours).

From Rocky Hollow the run climbs back up to the Gantry, regaining all the height lost in the first 10KM, but with plenty of downhill sections to make the climb longer, and with two rivers to be crossed, ensuring we run the rest of the race with wet feet. (I also discover that Australians do not call a section of road crossed by a river a ford.)

At this stage, the slower runners (including me) adopt the traditional recourse of the non-elite ultra-runner – we walk up the steepest of the uphill sections.

At about 17KM we have finished the loop to Rocky Hollow and have returned to The Gantry. We run along the ridge and start to descend into Pleasant Valley – which in about 25 KM will bring us to the finish in Dayboro.
By now it is past 8.00am and the sun is very strong and temperatures are climbing up to the 27C they will remain at for the rest of the run. Since the race is off road, through the Australian bush, the race rules include carrying water – even though we are supplied drinks and sweets about every 7KM. I was carrying two bottles, each with about 0.6 litres. Initially I was happy with just drinking the water, isotonics, and cola at the drink stations, but as the run progressed I found I was using my own bottles more and more, and indeed I had to refill both bottles during the race (drinking about 80% of the water and tipping perhaps 20% over my head and neck to help keep cool).

At about 27K we emerged from the bush and the dirt tracks turned into the tarmac, the road that would take us to the finish. At this stage the uphills and downhills were less pronounced than in the bush, but hills (both up and down) were still much more common than flat sections. At about 32 KM there was a short loop to ensure the race would be the regulation distance, so we ran 2KM up a side road towards Mount Pleasant Hall, and back, up two hills and down three hills on the way out, and up three hills and down two hills on the way back. The final 6KM was described as undulating by the team at the last drink station, but they were also the least scenic as we were now on a busier stretch of road and closer to the town of Dayboro.

As we reached to the outskirts of Dayboro, with about 2KM to go, I switched back to my regular running style, i.e. of running up hills, as well as running on the flat and downhills – confident that the end was near and that I had reserved sufficient energy.

As with any marathon, the end is always glorious, the organisers are clapping, the people who have finished recently are clapping, and as I cross the line my hand dashes to my GPS watch to ensure I record my time correctly, followed by a greeting and a photo.
The time is slow, very slow, 5 hours 7 minutes. My slowest ever marathon, and the first time it has taken me over five hours. However, it was definitely the hardest course I have ever run. It may or may not be Australia’s toughest race, but it was my toughest!

After numerous cups of water, and after clapping home some people who finished after me, it was back to the Queenslander, a shower, and out for lunch and a spot of Dayboro shopping and sightseeing, followed by dinner, and an early night and a long sleep.
Monday was a leisurely start, a visit to the art gallery in Dayboro (the commercial sort where they sell the paintings), and back to Brisbane and ‘real life’.

The race and its organisers

The race is organised in a fairly low key simple way, but very effectively. The marking of the route was excellent, nobody seemed to get lost, the drink stations were at the right place, well stocked, and manned by really supportive people.

The race has a long history, having been a 50KM ultra until a few years ago. The Run Inn (a Brisbane-based running equipment shop) organise the race and do a great job.

My one recommendation to the organisers would be to integrate the race more into the community of Dayboro. Most of the shops and people we spoke to in Dayboro did not know about the race, and a great event could be even better if it were more integrated into the Dayboro community.

I have visited Brisbane many, many times, and I am familiar with the Sunshine Coast, the Gold Coast, and Mount Cootha within the city. However, Samford, Dayboro, and the whole D’Aguilar National Park area were completely new to me, and they came as a massively beautiful surprise. The D’Aguilar National Park is perhaps the most beautiful area I have visited in Australia (for me ahead of the Blue Mountains). Samford is just 45 minutes outside of Brisbane’s CBD (central business district), and it is a wonderful collection of eating places, kitch, crafts and is a very pleasant relaxing place (although with a tendency to close about 3pm).

Dayboro claims it is the place where the East ends, and certainly beyond Dayboro the scenery gets a lot wilder, hillier, and more beautiful. Dayboro is not as pretty as Samford, but it has a nice feeling to it and I’d recommend the information centre, the art gallery, and the deli.

Beyond Dayboro is the D’Aguilar National Park, with walks, cycle routes, and routes for four-wheel vehicles. High on the Mount Mee road is the Pitt Stop, a café popular with motor bike riders, and with a view that is stupendous. The views include: the hills, the forests, the valley back to Dayboro, and on the horizon, the high rise buildings of Brisbane’s CDD – a graphic reminder that this paradise is a just a short drive from the heart of Brisbane.