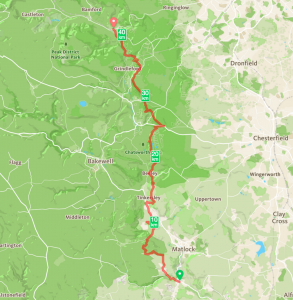 As I type this I am sitting in my room in the George Hotel in Hathersage, tired but happy. The hike from Cromford to Hathersage was 41.7 kilometres, which is almost exactly 25 miles.

It was not a fast walk, with heat, a rucksack, plenty of hills and a stop for food, indeed the walk took me just over 11 hours. But, the key thing is that I feel that I am back in the groove.

There were many highlights during the day but a few of them were:

The millpond in Cromford, where I started today. 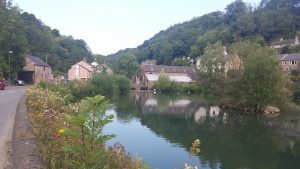 A fountain and nearby a cross and well dressing in Bonsall. 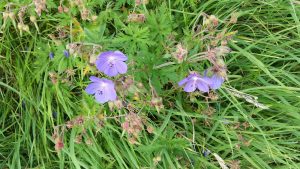 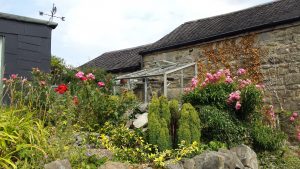 The bridge at Darley Dale

In Chatsworth park I had a great vew from the top of the waterfall that used to power the fountain (maybe it still does?) and of the Hunting Tower.

Derbyshire has many impressive rocks, here are two that could look sinister with the right lighting and music.

The Eagle Stone is my favourite rock in Derbyshire and I have been coming back to look at it and sometimes to try and climb it for about years, so far.

A large part of my walk today was on the edges, a series of cliffs overlooking the valley below. Once you climb up to them the walking is quite flat and view stupendous.

And finally I reached the George Hotel in Hathersage, just in time for dinner.

Walking for 11 hours gives one plenty of time for thinking, and sometimes for coming up with definite plans for the future. One plan I have is never to go hiking with a map that is 20 years old! I had several problems when a route I was planning to take, which existed on the map, was now a road, or a street, sometimes with houses. Social researchers are fond of saying the ‘map is not the territory’, but I want my map to at least be up-to-date in the future.

Not all of my photos have uploaded, so I will upload them later in the week.