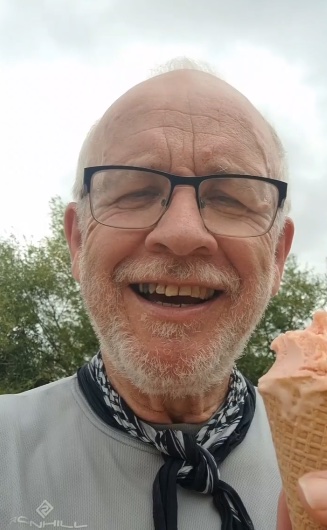 Two days ago, I set out to see how far I could run in eight hours. The conditions were not great. In the UK, we are having a heat wave, and it is less than three weeks since I finished the 268-mile Spine Race. But Friday was the day I had picked, so I gave it my best shot.

The background to this challenge is that it is my own challenge. It is completely unofficial, it is based on trust, and there are no fees and no prizes. The rules are simple, pick a day, start running (or walking) and see how far you can get in eight hours. You can stop as often as you like, but the clock keeps ticking. 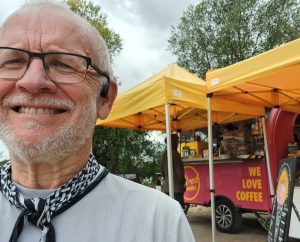 For my attempt, I decided to run in and around Colwick Country Park, a flat area near my house. On Friday morning, I loaded my car with snacks and drinks and drove down to the park. The park has quite a lot of routes that are shaded by trees, it has toilets and it has an excellent coffee stand (Wired on Wheels).

I have not recovered my speed since my recent Spine race, and for this run, I decided to focus on my heart rate rather than speed. I picked 110 to 115 beats per minute as my target range. My logic was that if I dropped below 110 beats a minute, it would be a sign I wasn’t trying hard enough. If it went above 115 beats per minute, then I might find that I ran out of energy before the eight hours were complete. Note, the current thinking about low heart rate running is that the target should be 180 minus your age, which for me is 115. 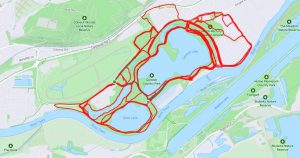 At 6:13 am, I started my Garmin watch and started running. At that time of day, it was warm, but not too hot. As you can see from the route map, the park is not so big, so I ran many of the paths multiple times. Because I was spending so long in one location, I listened to a podcast for three or four hours during the run.

In total, I ran just over 62km (just over 38 miles). Interestingly, my watch showed that I was only moving for 7 hours 8 minutes of the eight hours. For the other 52 minutes, I was eating, drinking, dousing my head with water, visiting the toilet, or queuing up for a coffee at the coffee stand.

The distances covered in each of the eight hours (and my average heart rate) were:

From the data above, I can see that I took my foot off the pedal a bit in hours 6 and 7. These two hours were slower than the other six hours, and my heart rate was lower. I can also tell that was coasting a bit during those two hours since I was faster in the last hour when I knew I was finishing soon. I use data to understand my running better. I could have run further if a) I had run with a slightly higher heart rate, and assuming I did not as a consequence, run out of energy, or b) if I had been working on my speed more over the last few months, which would have meant that I could have travelled further whilst holding my heart rate at 114 beats per minute.

One of the interesting things I noticed was how big the speed difference was between running on tarmac, running on firm soil and running on gravel paths. The paths were mostly a mix of firm mud (because of the heat wave) and gravel. But there is a tarmac path that goes about halfway around the larger lake). The tarmac was a bit faster than firm mud, which was quite a bit faster than the loose gravel. I know this from theory, but it was interesting to see the difference in practice. My feeling is that the tarmac was about 40 seconds a kilometre faster than the loose gravel for the same sort of effort.

I really enjoyed the day, it was running at a comfortable pace, without any pressure, and the park was full of life. As part of my recovery from the Spine Race, I think this run was really helpful. I was pleased to run for eight hours without any soreness or blisters. I also learned a bit more about my body, how it works, how I respond to terrain and weather, and my ability to motivate myself. This is a never-ending learning process for two reasons. 1) There is so much to learn, and each time I only get to see a small part of the picture. 2) The picture changes over time as I age, as I get fitter or less fit, as I lose weight or put on weight, and as the conditions change.

In terms of kit, the key bits were Scott’s trail shoes, Injinji socks (merino wool with separate toes), Redhill Road Runners’ top, aftershock bone conducting headset, and my neckerchief. The neckerchief was mega useful. I kept visiting the tap in the toilets and using it to douse my head with cold water and to wear it dripping wet around my neck.

The challenge is still going on and will continue until the end of July. One of the runners from my club has managed over 80km (more than 50 miles). Click here to check out the Facebook event.