I have just had a great weekend. The weekend was focused on running but I also managed to include some culture and history. For the foreseeable future, this sort of weekend is part of what ‘the dream’ means to me (my dream might be quite different to your dream).

The British Master Trail Running Championships
On Saturday morning, I took part in a trail race in the Forest of Bowland, in Lancashire. The race was the English Masters Trail Running Championships for 2022. BTW, ‘Masters’ just means for people over 35 years of age. There are categories for every five years, which means I run in the MV65 group, male veteran aged 65 to 69 years.

Because of the remote location of the race, public transport was not possible, and the drive there was more than three hours. Given the registration for the race started at 8am and the race began at 10am, I travelled to the area on Friday, stopped overnight.

The race was the PuddleDucks Trail and was 13 km in length. The terrain was a great mix of tracks, river banks, mud, and hills – with the route clearly marked. The race was organized by the Fylde Coast Runners (I mention them because they did a great job and I want to include this link to their website in thanks).

I was delighted to finish 14th out of the 47 runners and delighted to finish first in my age category. Because of the training I have been doing for the Pennine Bridleway and Spine races, my speed is less than it was last year, so I took the race fairly steady. When I am racing, I wear a chest heart monitor and use that to guide my effort. I picked 142 as my cap today and was pleased to see that my average heart rate for the race was 137, and the maximum it reached was two very short spikes of 147 bpm. When I get my speed legs back, I will run with an average of perhaps 144 and spikes of 154.

The chart shows my pace, my heart rate and the shape of the hill. What I try to do is keep my heart rate steady throughout the race. If you look at the steep uphill section, my heart rate is fairly constant, but my speed drops a lot. The other places where my speed dropped were features such as stiles, gate, a tricky mud patch, and two water stops.

On Sunday, I ran in the Peak District with friends and people from The Free Social Trail Run group. So, after the trail race on Saturday, I drove from Lancashire to Macclesfield in Cheshire and stayed there overnight. Macclesfield is about 8 miles from the place where we were to meet on Sunday morning, so it was a good overnight spot.

I have never visited Macclesfield before, and I decided to try and understand at least one thing about the town, its people, and its history. After checking in at a hotel, I went to the Silk Museum and enjoyed looking at the exhibits and reading the information. I also had a really good chat with one of the people from the Silk Museum.

Macclesfield has been associate with silk for centuries and has been known as ‘silktown’. As I walked around the town I spotted all sorts of links to the history of silk and the wealth it had created for some of the mill owners.

In the 1820s there were about 70 silk mills in Macclesfield. As with mills elsewhere, life for the people working in the mills was dangerous and unpleasant. Injuries and fatalities were common, and wages were low. Today there is little silk in the town, but the heritage remains, especially in buildings and street names.

The chat I had at the museum expanded from just silk to the history of protest and dissent, including the early formation of trade unions, strikes, protests, and the rise of Methodism (a dissenting religion). I will visit Macclesfield again and learn about it in a more structured way. Serendipity worked me on this trip, as it so often does if you let it. 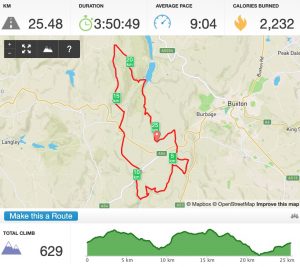 A Social Fell Run in the Goyt Valley
The weekend was rounded off with a fantastic social run led by my friend Suzanne Roebuck. We met at 9am at the Derbyshire Bridge car park, in the Goyt Valley. The run was organised under the umbrella of Sam Hill’s The Free Social Trail run group.

A social fell run is all about the company, the scenery, and the challenges. The group sticks together and works at a pace that works for those who need to run slowest. I do not often run in this part of the Peak District, so the route was a joy. We covered about 25 km in just under 4 hours. At about halfway, a few of the group headed back to the car park, as had been previously agreed.

I tend to carry a heavier rucksack than most of the others, which is my choice. I carry more food and water, but also a pretty big first aid kit, spare clothing, a bivvy bag and waterproof trousers. Of course, we all carried or wore waterproof jackets.

The route involved quite a few ups and downs but no really big hills. In the early part of the day, visibility was limited by low cloud, and in the latter part of the run, it rained (quite hard). It was an unusual pleasure for me to have no navigational or organisation duties. Suzanne marshalled and led the whole day expertly. If you are looking to get into trail or fell running, then definitely check out the Free Social Trail Run group on Facebook.

Highlights of the run included Axe Edge Moore, Three Shires Head, and Shining Tor. Meeting and chatting to other people out on the moors, the occasional views across the Peak District (when the weather changed). But the main high point was being out running and talking.

When the rain started the group divided into two camps. The first group put on their waterproof jackets, knowing that because it was a warm and humid day, they would get wet with sweat. The second group, which included me, did not put our jackets on, which kept our temperature at a nice level but resulted in being soaked to the skin.

The Dream?
This was a great weekend. I was able to mix racing, running socially, spending time with friends, meeting some people who may become friends, and learning about the history and culture of Macclesfield. This sort of weekend is something I plan to do more of over the next few years.